← The Bible versus the “Church of Christ” by James Melton
THE CULTS, Grace and Works by Craig Branch →

Is Baptism Essential To Salvation? by baptismalregenerationheresy.com 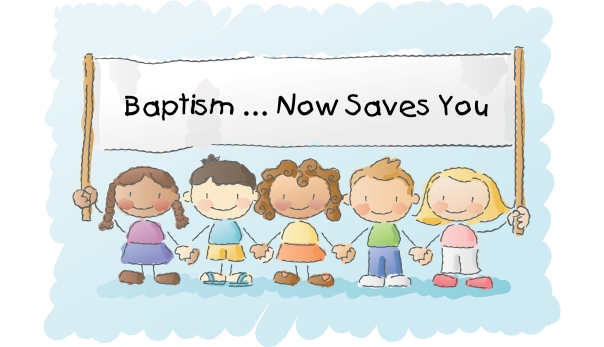 There are many churches and individuals who believe that people must be baptized in water in order for them to be saved from their sins and go to Heaven when they die. Some churches teach that baptism is essential to salvation. Those churches generally believe that anyone who trusts Jesus, but does not also get baptized in water before they die, must then go to Hell, because they did not perform the “good work” of getting baptized that they might be saved thereby.

Churches believing that baptism is essential to salvation tend to de-emphasize the Blood of Christ as an all-sufficient payment for sin. Instead, they believe that the blood of Jesus is not really sufficient to “cleanse us from all sin”. (See I John 1:9). Instead, they believe that salvation must be obtained through both the good work of Christ on the cross, and through the good work of man in baptism. People who hold to this false doctrine believe that Man therefore becomes a “co-redeemer” together with Christ. They believe in salvation by the grace of God plus the works of man. This is the erroneous belief that Jesus and man both work together to pay for sin, a doctrine also taught by the Popes of the Roman Catholic Church.

Those churches believing that baptism is essential to salvation often use such verses as Acts 2:38 to support this point of view. This view of baptism held by the Church of Christ can be traced to its founder, Alexander Campbell. Alexander Campbell once said that, “Immersion is that act by which our state is changed” The idea that baptism itself saves, (instead of Jesus alone saving us from our sins through His own redeeming blood shed on the cross), is called “baptismal regeneration”.

The act of baptism is actually a picture of what should have already happened in the lives of believers before they were baptized. Namely, that they have already been forgiven for their sins and therefore they have already been made ready for Heaven by trusting Jesus alone for salvation. This then brings up an interesting question: If all of their sins were already forgiven before they were baptized, then how can there be any sins left over for baptism itself to “forgive” or wash away? Also, which sin will they be sent to Hell for, if someone had trusted Jesus, but then died before getting baptized?

I was baptized a few times before I was actually saved. In fact, all that happened to me on those occasions was that I got wet. I was not saved by getting baptized. When I did get saved by trusting Jesus alone for my salvation, I was e again baptized — but this time out of obedience to Christ! Since I had already been saved, I had no need to try to earn my own salvation by my own good work of baptism. Jesus had already saved me. Jesus did all the saving. It was all Christ.

I once knew of a lady who desired to be baptized. When she was baptized and came up out of the water, she praised God that she was now saved. What she meant, of course, was that she was lost in sin before going down into the water. She was trying to save herself by her own good work of baptism. Needless to say, this woman very quickly fell back into the world and back into sin, proving that she was never truly converted in the first place. Her baptism, (which was an act of “salvation by works”), did not save her from her sin.

“Enter ye in at the strait gate: for wide is the gate, and broad is the way, that leadeth to destruction, and many there be which go in thereat:” (Matt. 7:13)

Most people try to be saved by their good works, such as by the good work of baptism. God’s way for you to be saved is by His grace through faith in Jesus’ blood alone, which Jesus shed outside Jerusalem at Calvary to pay for your sins. The Bible says:

“For by grace are ye saved through faith; and that not of yourselves: it is the gift of God: Not of works, lest any man should boast.” (Eph. 2:8-9)

Hello, my name is Damon. I have been studying Christian Cults since 1985 and doing Cult Apologetics online since 1998 because I grew up with Mormons, Oneness Pentecostals and Bible Missionaries in my family. All three of these groups (or Cults) think they are the One True Church and the Only True Christians and to be Saved you must join their Church. So as a result I started studying the Bible for myself to try to determine which of these groups had the truth. After much praying, reading and studying I decided the Mormon, Oneness Pentecostal and Bible Missionarie churches are not real Christian Churches at all, rather they are Christian Cults because they do not line up with what the bible really teaches about Salvation and they are not in agreement with other Essential Christian Doctrines. I found that according to what the Word of God teaches, and Historic/Orthodox Christian Teaching, Salvation cannot be earned by any form of human works or efforts I found that Salvation is ALL by the Grace and Work of God and that Salvation and Eternal Life are a Free Gift from God (Ephesians 2:8, Romans 6:23, John 3:16) to all who will Trust in Jesus Christ and the atoning sacrifice He made for us by dying on the Cross for the sins of the world (1 John 2:2). The Word of God is clear and plainly says “Believe in the Lord Jesus, and you will be saved” (Acts 16:31). Because I know what it is like to be targeted by Cult Groups and to suffer from the spirtual confusion and frustration brought on by their false teachings, I have endeavored to help others find True Eternal Life in Jesus Christ and to break free from the clutches of, and to be healed from the damage done by, Cult Groups who claim to be the One True Church. So it is my hope and prayer that the Lord will use my Websites to help those that need help and that some who use my websites will be helped by them to find the Free Gift of God’s Salvation, that is only found in His only begotten son Jesus Christ.
View all posts by Damon Whitsell »

← The Bible versus the “Church of Christ” by James Melton
THE CULTS, Grace and Works by Craig Branch →